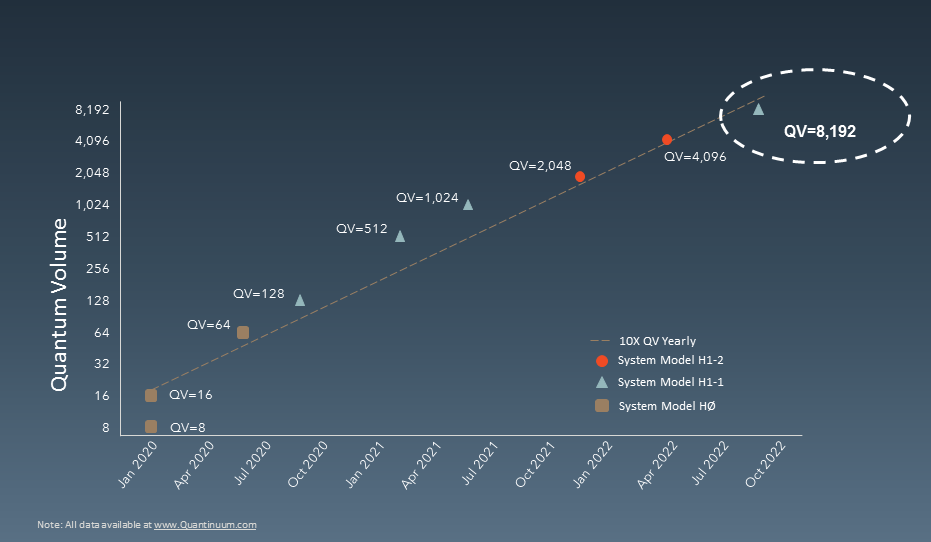 This year has seen two new records for quantum volume on Quantinuum’s trapped-ion quantum computing platform, the System Model H1 Powered by Honeywell. The most recent quantum volume measurement of 8192 is particularly significant.

According to Dr. Jenni Strabley, Senior Director of Offering Management at Quantinuum, this new gate design provides a third option for Quantinuum to increase the efficiency of the H1 generation.

Presently, researchers can do single qubit gates (rotations on a single qubit) or completely entangling two-qubit gates. Any quantum operation may be constructed using only those basic components.

Researchers can use this new gate to execute tougher tasks that previously resulted in catastrophic mistakes. They would be most useful to researchers studying machine learning, variational, and temporal evolution algorithms. This development is significant for modeling other quantum systems’ behavior.

Quantum Volume, what it means and its history

Quantum volume, a benchmark created by IBM in 2019, is a metric widely employed in the industry for measuring the performance of a quantum computer employing randomized circuits.

Quantum volume tests necessitate the execution of arbitrary circuits. The qubits are randomly coupled, and a sophisticated two-qubit operation is conducted at each slice of the quantum volume circuit. The arbitrary angle two-qubit gate may be used to build this SU(4) gate more efficiently, decreasing the error at each stage of the process.

The H1-quantum 1’s volume of 8192 is partly due to the development of arbitrary angle gates and continuous error rate reduction. The recent quantum volume growth in Quantinuum occurred in April when the System Model H1-2 quadrupled its performance to become the first commercial quantum computer to reach Quantum Volume 4096.

The System Model H1-1 passed the quantum volume 8192 benchmark with flying colors, producing hefty results 69.33% of the time and above the 2/3 barrier with a 95% confidence interval lower bound of 68.38%.

This is the seventh time in two years that Quantinuum’s H-Series technology has established an industry record for measured quantum volume, as the company continues to meet its 10-fold yearly improvement objective.

TKET is a sophisticated software development kit that allows you to write and run programs on gate-based quantum computers. It has been an open source language for about a year. TKET allows developers to improve their quantum algorithms, decreasing the computing resources needed in the NISQ era. Over 500,000 TKET packages have been downloaded.

TKET is open source and can be accessed via the PyTKET Python module. The SDK is also compatible with important quantum software platforms such as Qiskit, Cirq, and Q#.

This availability and TKET’s portability across numerous quantum computers are crucial for developing a community of quantum algorithm creators. Many corporations and academic organizations account for numerous users in the number of downloads. The arbitrary angle two-qubit gates and other recent Quantinuum advances are all built into TKET.