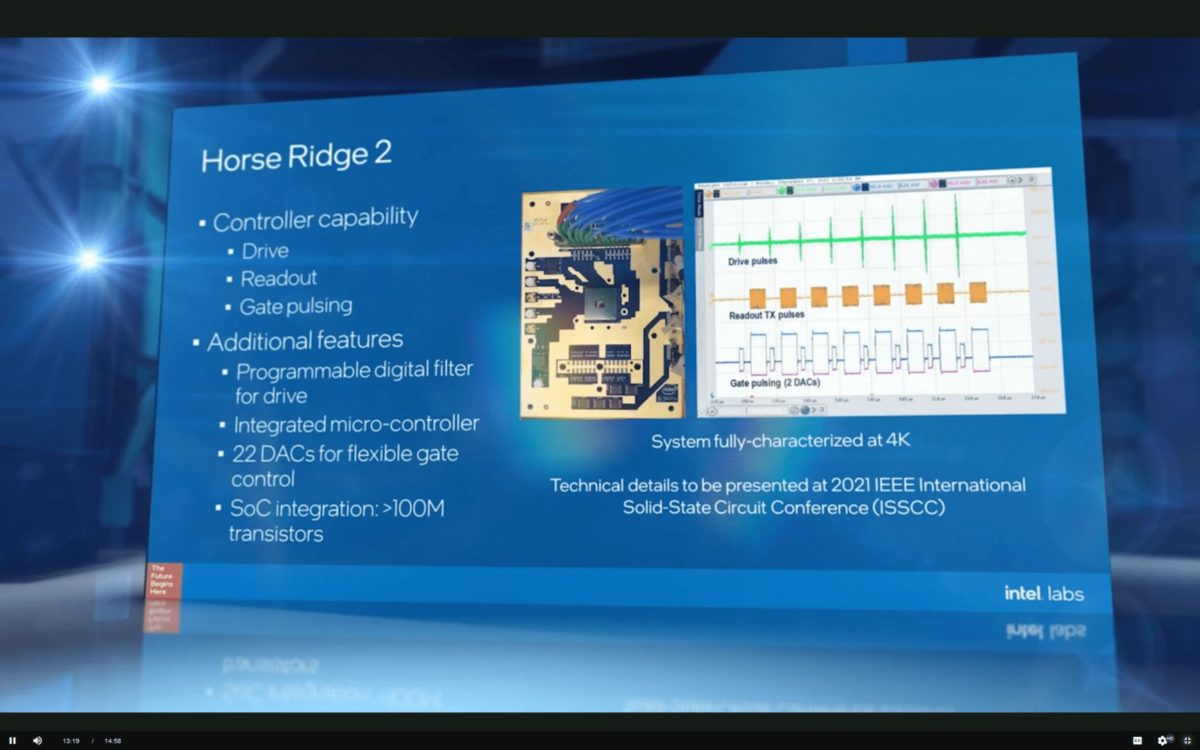 At a recent Intel Labs virtual event, the company revealed Horse Ridge II, a second-generation cryogenic quantum control chip. This is a milestone among others in Intel’s progress to overcome one of the toughest obstacles in quantum computing, scalability. Improving upon the first-generation chip from 2019, Horse Ridge II has enhanced capabilities and allows for increased integration to control quantum systems more precisely. Some of the new features are the ability to manipulate and read qubit states, as well as controlling the potential of several gates needed to entangle more than one qubit.

Many of today’s early quantum systems operate at room temperature, and use cables routed to the qubit chip inside a dilution refrigerator. An approach like this is not scalable due to power consumption, size, and thermal load concerns. The original Horse Ridge was the first step to address this challenge, radically simplifying the design to eliminate excessive equipment and more than thousands of wires. The refrigerator would require significantly less complicated wiring when the quantum machine is operator this way. Intel replaced these with an highly integrated system-on-chip (SoC) that simplifies the overall design. Some complex signal processing techniques also accelerate setup time, improve qubit performance, and let engineers scale the system efficiently to larger qubit machines.

Horse Ridge II improves upon the first-generation SoC’s radio frequency pulse-generation ability, which is used to manipulate qubit states. It is known as qubit drive. The new control chip has two fresh control features, further allowing for integrating external electronic controls into the SoC inside the cryogenic refrigerator.

The new features are:

Qubit readout: The chip can read the current qubit state, and this is significant, allowing for on-chip, low-latency qubit state detection without storing large amounts of data and freeing up memory and processing power.

Multigate pulsing: This allows Horse Ridge II to control the potential of the many qubit gates allowing for effective qubit readouts, as well as the entanglement and operation of multiple qubits, furthering the possibility of a scalable system.

Adding a programmable microcontroller within the circuitry allows Horse Ridge II to be flexible and control the three functions’ execution elegantly. The microcontroller employs digital signal processing techniques to perform additional filtering on pulses, which helps reduce the crosstalk between individual qubits.

Horse Ridge II is implemented with Intel 2nm low-power FinFET technology (22FFL), and it has been verified to function at 4 kelvins. Other quantum computers operate in millikelvin ranges, a tiny fraction above absolute zero. Silicon spin qubits, which are what Intel’s new chip hinges on, possess properties for this new range of functionality, above 1 kelvin. This will significantly reduce the refrigeration process’ challenges.

The cryogenic control research has the aim of achieving the same operating temperature level for both the silicon spin qubits and controls. Instead of employing brute-force methods to scaling quantum interconnects, ongoing advances and breakthroughs such as Horse Ridge II show how Intel values long-term quantum practicality.