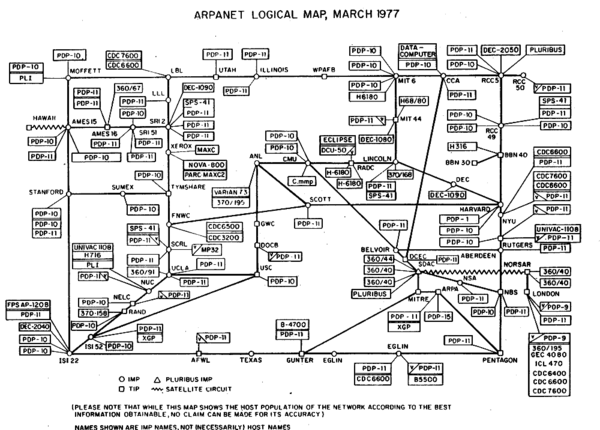 The Quantum internet is developing with great speed in the last couple of years. Many universities and enterprises have started their research on how to create these quantum networks and take advantage of this new technology, and some of these advancements namely the enabling Quantum technologies behind the Quantum Internet are outlined in a recent Science magazine article.

A Brief History of the Internet

In the late hours at 29th October 1969, just only 2 months after the Woodstock festival in the middle of the Vietnam war, a young student at the University of California (UCLA) named Charley Kline has successfully sent a message to a computer 500 kilometers away at the Stanford Research Institute in Menlo Park. This was one of the first footsteps of the first internet called the ARPANET. And in 1994, a couple of decades later, the physicists had begun to wonder if this infrastructure could bring something more exotic to the table, the quantum information. Namely the mathematician Peter Shor has devised a new quantum code that was able to break a leading encryption algorithm, and that was something that classical computers could not do. Shor’s algorithm suggested that quantum computers may have a killer application in cracking code. And his effort has sparked the desire in the science world to build those magnificent machines and some scientists have asked themselves the question if this quantum internet may immensely enhance the power of quantum computers?

But building these quantum machines is a challenge, both entanglement and superposition that are essential for this technology are very fragile and collapse when perturbed by outside forces. And the dream of building these general-purpose quantum computers was left for some distant future.

But recently quantum computing has returned to the spotlight, and quickly gained traction. In order for these machines to do something purposeful, they are going to require some firepower of hundreds or thousands of qubits, far beyond today’s possibilities. But quantum networks may start to prove their value and a few nodes soon may be reliably entangled.

The first networks capable of sending individual entangled photons have started to take shape. In 2017 a report from China said that a quantum satellite named Micius has successfully sent entangled particle pairs to its ground stations who were 1200 km apart from each other. This caused turmoil in the US, and President Donald Trump has signed the National Quantum initiative act that goal was to make the United States gain traction and follow these Chinese advancements. They included 25 million on research and development of a quantum internet link up labs and universities.

QKD, a key technology for the quantum internet

Governments and industry started to gain the advantage of these first links for the purpose of secure communication, through a method named quantum key distribution or shortly QKD. This method allows the two parties to share a secret key between them by making simultaneous measurements on pairs of entangled photons. This new way of connection keeps the key safe from hacking and eavesdropping in the way that if a third party comes and tries to hack the link it is going to destroy the entanglement. The information encrypted with the key travels to ordinary channels. QKD was used until now for elections and was tested by some banks, and some experts are questioning its importance because there are simpler methods of encryption and also, these methods are equally effective against attacks. But as Neil Zimmerman says, there is more to it than this.

Who may benefit from this quantum internet?

Science would be the first one to benefit from this groundbreaking technology. Most notably it can improve the long baseline interferometry. This method has already linked radio telescopes around the globe and effectively creates a single giant dish, that is capable to image a black hole in some faraway galaxy. The challenge with this is combining the light from far away telescopes. And physicists have created a scheme to capture light from the telescopes in quantum memories, and later use the entangled photons to extract and combine together this information, and that is key for ultra-high resolution. Read the full article.

More practical applications may include hack-proof communications in which the information is shared between the nodes, and not like with QKD where only a key is shared. Entanglement can also synchronize atomic clocks and prevent errors and delays. And this quantum internet may link quantum computers and that connection would increase their power.

And if we take the idea further, we could create an analog to quantum computing called blind quantum computing. The idea behind this is that quantum supercomputers will one day be located at national labs, universities, and private enterprises. And users could use their local computers to communicate to these quantum supercomputers for the purpose of encoding a problem. While using the distant quantum computer power they will solve their problem from their workplace without the need of going to a laboratory or university. Everything will be done from distance.

How are researchers are moving forward with these advancements?

In 2015 Stephanie Wehner and colleagues at TU Delft have entangled photons with electron spins in nitrogen atoms while encased within two tiny diamonds 1.3 km apart at the Tu Delft University campus. These photons then were sent to an intermediate station, where they interacted between them in order to entangle the diamond nodes. This experiment has set a record for the distance of entanglement.

Bigger networks are likely to require quantum repeaters to copy, correct, amplify and rebroadcast every signal. Although the repeaters are a straightforward technology for the classical internet, the quantum repeater could be quite more complex to create.

Lukin Group is building quantum repeaters using silicon atoms that are encased in diamonds. With this method incoming photons will tweak the quantum spin of a silicon electron, creating a potentially stable memory in the process.

TU Delft is also pushing this method with the diamond approach as well, the only difference is that they are doing it with nitrogen atoms instead of silicon. The team has reported a successful entanglement of three diamonds in the lab, creating a small quantum network in the process.

We may conclude this article and say that although quantum internet a couple of years ago was obscure and nobody was discussing it, now it quickly gains traction with the recent developments at TU Delft with their successful experiments in creating these quantum links. With this examples we can see that some of the things we thought were impossible are now happening, and who knows what the future holds.