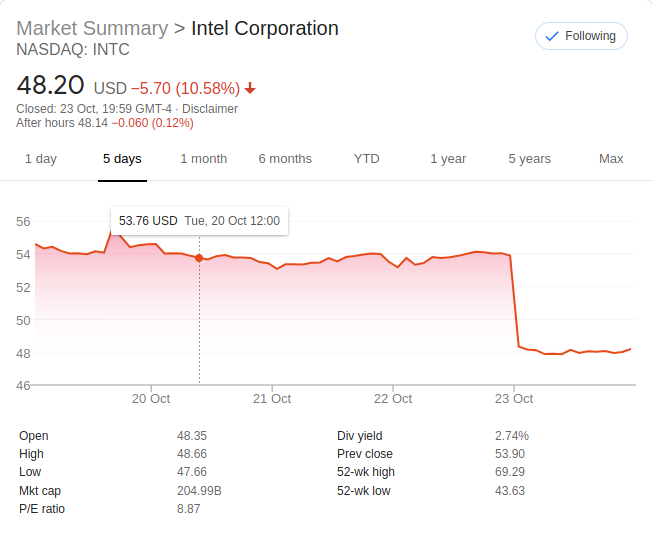 Intel Stock craters again, but could the company be the best value Quantum Computing play?

The last earnings review for Intel was not kind. The sale of its memory business contributed to a massive decline of around 11% in its share price. Seemingly out-smarted by the the likes of AMD and NVIDIA, the chip maker seems to have fallen foul of Wall Street. But could the company which is the only chip maker that conducts research in Quantum Computing be one of the most under-valued ‘Quantum’ companies?

Revenues from Intel also declined when more of us are using technology as we work from home, but it appears that revenue at Intel went down by 4% as buyers found competitors offerings more compelling. Friday saw the share price decline by around 11% which is considerable considering that the price to earnings ratio is very low (very inexpensive) having a P/E ratio of under nine. Compared with heady P/E ratios of 160 for the likes of AMD for example.

However Intel still makes chips, that still power many of the devices we use, but what sets this company apart is that it is the only chip maker engaged in research into quantum computing. Shareholders on one hand may think of this as a ‘folly’ as its main market declines whilst others may see this as a smart bet. We are obviously encouraged to see Intel’s efforts and think the company can represent a cost effective way for investors to get a piece of the Quantum Investment pie.

You can read more about what Intel gets up to with its Quantum efforts in superconducting qubits and its 49 Qubit Tangle lake processor.