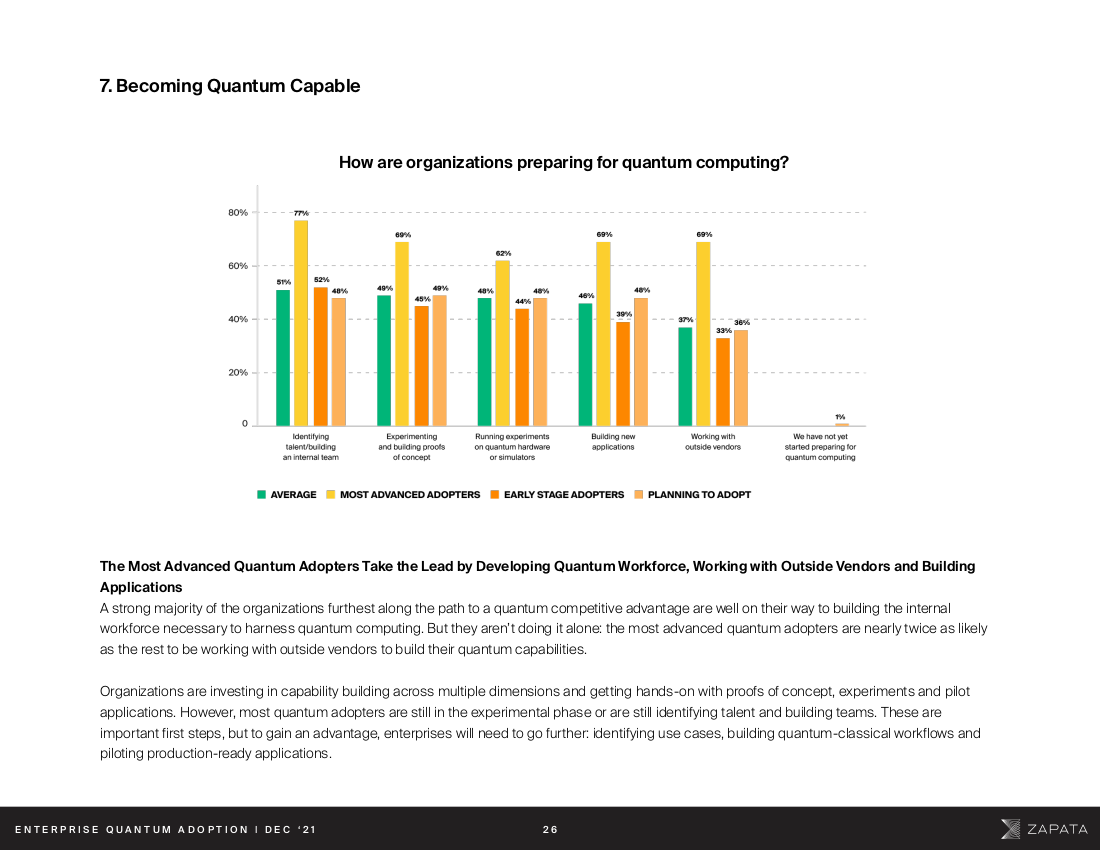 A recent survey commissioned by Zapata Quantum Computing about Quantum Computing and the Enterprise is now released. There are some interesting takeaways such that adoption is highest in the transport industry (likely due to routing and optimization) and that over 40% of quantum adopters expect to see a competitive advantage emerging from Quantum within the next two years. Almost 70% of global enterprise executives have adopted or plan to adopt quantum computing within the next 1-2 years, even though 96% of respondents need more than 10 minutes to explain what it is.

Here are some key summary points from the survey:

The study drills into more details, but if you want to read a bit more flesh, here are more details.

Machine Learning and Data Analytics Are the Top Quantum Use Cases

This is particularly true in the US, where 71% of respondents are most interested in using quantum computing to address machine learning and data analytics problems. Machine learning is the most likely use case to deliver near-term value for the enterprise, as areas where classical ML struggles — such as generative models in unsupervised and semi-supervised learning for augmenting datasets in predictive models — are better suited for quantum devices.

Organizations are ramping up their quantum investments significantly beyond the ~$100K R&D budgets of the past, representing a turning point in adoption. The earliest adopters of new technologies are more than twice as likely to invest more than $1 million in quantum computing than their late adopter peers (37% vs. 13%).

Organizations Need Quantum Vendors, But Are Concerned About Getting Locked-In

Complexity Is the Greatest Barrier to Quantum Adoption

49% of respondents perceived that the biggest hurdle to quantum adoption was the complexity of integrating quantum computing with their existing IT stack. Quantum computing will always exist in a hybrid model with classical computing, and almost all near-term access to quantum devices will be remote. Managing this complexity calls for new workflows to orchestrate the integration of quantum and classical resources. Other top hurdles included security concerns, lack of existing advanced capabilities (AI/ML) to build on, lack of talent or expertise, and a lack of clear use cases.

36% of leaders surveyed at US organizations are in the early or advanced stages of quantum adoption, with 12% of those organizations expecting to achieve a competitive advantage within one year or have already achieved an advantage. The US also leads in quantum investments, with 44% of quantum-adopting organizations budgeting more than $1 million for the technology.

Quantum Adoption Is Highest in the Transportation Industry

63% of respondents in the transportation industry are in the early stages of quantum adoption, the highest for any industry. This could be a response to the ongoing supply chain crisis, as quantum computing has immense potential to optimize shipping and logistics networks. Methodology: The survey was conducted in partnership with Wakefield Research and is based on responses from 300 leaders (CIOs, CTOs and other VP-level and above executives) at large global enterprises with estimated 2021 revenues of over USD $250 million, and estimated computing budgets over $1M.