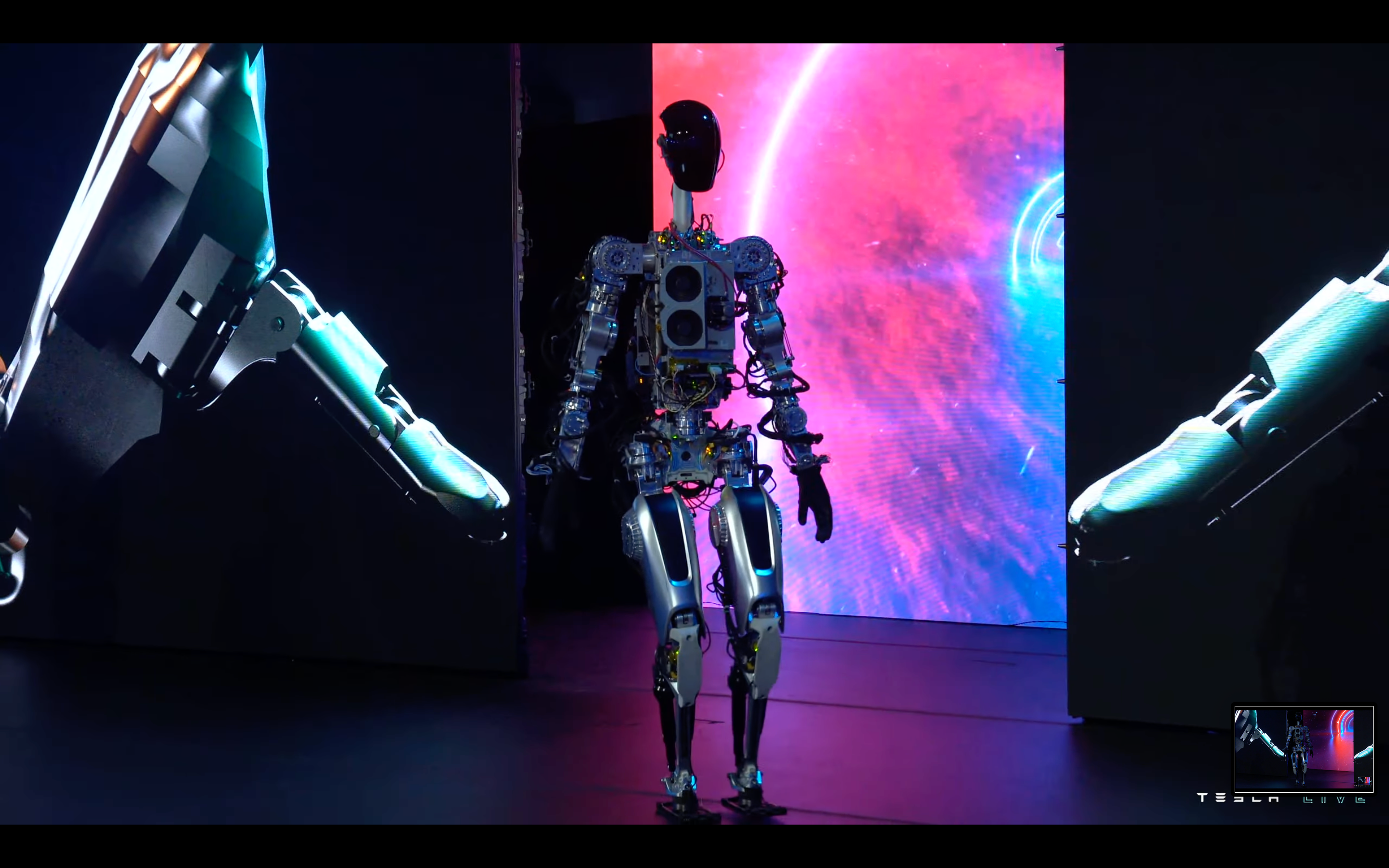 Tesla is perhaps best known for its vehicles. But Tesla also incorporates a range of other products and technologies, including solar power and batteries (its power wall). Pundits often think that Tesla is more a technology business rather than a car business, with many describing a Tesla car as a computing platform on wheels. Beyond marrying batteries and an electric motor, Tesla’s founder Elon Musk has been a central driving force (no pun) behind FSD or Full Self Driving, with the promise of a driverless future. What was so impressive about the Tesla bot or Tesla Robot is that the company used the same platform its cars use for sensing and responding to road conditions to control its robot.

Cheap and plentiful robots for all

On the surface, many may be forgiven for thinking that the robot that carefully walked around on the Tesla stage was a little behind other robot developments from Boston Dynamics (watch the clips of their dancing robot). However, that would be a disastrous comparison for the Boston Dynamics robots are typically highly programmed or choreographed, unlike Optimus, which uses the Artificial Intelligence brain from Tesla’s self-driving efforts, which you can think of as an off-the-shelf series of components which means less specialist hardware and software.

That means that just as Henry Ford wasn’t the first to invent the motor car but brought it to the masses, Elon Musk might be doing the same, only with robots. For all of the technical prowess of Boston Dynamics (oh, and they are impressive), they aren’t going to be in your living space, factory or retail outlet anytime soon, and for a good reason – they are just so expensive and need extensive programming and support. However, research emanating from Boston Dynamics is certainly not wasted, and their extensive experience in dynamic systems will, I’m sure, find its way into production.

Elon could be the future Henry Ford of Robots, bringing the price of robots down to something more manageable for businesses and individuals to purchase. Musk estimates around $20,000 for the robot that wowed the audience. Of course, the robot could be underwhelming at face value, but that would be a disservice to what the Tesla team is trying to achieve.

Elon being well, Elon is not content to leave development there and is already working on another version of the robot. So Tesla is building a robot platform, not a robot, just as it builds mobile platform technologies with its vehicles.

Its engineers are focused on price points and engineering challenges that can bring products to the masses. Just as Tesla redefined the luxury experience and electric vehicles, expect the same disruption in the robotics space. Tesla has made luxurious cars into a mass market, sorry BMW and Mercedes. The American monster shows how it can make mass production runs of its products and retain customers, loyalty and a growing fan base.

The key to getting robot adoption is price. Let’s not beat around the bush; the same can be said for electric vehicles, which until recently were the plaything of just a few individuals that could afford the expensive battery packs and offset the R&D costs. Before Tesla, electric vehicles were the domain of very few indeed, such as those who could get their hands on the ill-feted EV 1 from General motors or those who were more accustomed to golf courses and golf buggies.

The focus here isn’t so much the superficial wow of a walking robot on stage (not the first). Still, the sheer commitment to continue to drive innovation and make the invention available and potentially affordable. Sure, we might still be some way off from seeing a robot doing the cooking at home, but with Tesla, it is at least on course.

Already Tesla has its humanoid robots working in its Freemont plant. Whether this is a stunt or just for show, we don’t know, but impressive that it can have humanoid form robots working there and not the static style robots we typically think of operating in car plants and certainly taking less room, portable and manoeuvrable.

The Power of Data

Because we do not have mass market robots, we don’t have data on their usage that could accelerate development. That means we cannot go around a feedback or improvement loop and better innovate. As tools such as search engines and other digital products have collected more data, they have become more intelligent. This feedback loop has led to ever more intelligent products and new models and has ushered in the field of Data Science and Machine Learning. Although, before mass data, there wasn’t the amount of data for models to learn, and one could argue neither the demand, now we value the data exhaust that each of us generates.

The modern world has many models driving much of contemporary life. No, not the sort of toy models or the models on the front of GQ or Vogue magazine but the kind of models that drive much of our modern life. If you apply for a credit card, your data gets fed into a decision model which ultimately dictates the risk or price of a loan or credit card or whether you should have one at all. With so much data around, businesses have looked to find ways to exploit this new data or signals to get a competitive advantage over their rivals.

Machine Learning, or ML, has become one of the most exciting (other than the Quantum, of course) domains over the last ten years, accelerating a range of areas in everything from self-driving cars to understanding text or generating new images. We see new and creative ways ML enhances our lives in everything from your smartphone to self-driving to speech recognition to search.

Deep Learning models such as those developed by DeepMind and part of Google in the UK are assisting scientists in fields such as Drug Discovery, where their applications of AI are helping to move the area to new highs. But, going beyond just playing Atari games better than any human, their AlphaFold project might have cracked one of the most challenging problems in biology: namely proton folding.

Quantum Machine Learning is not just a new name for an old thing.

QML isn’t just a sexier name for Machine Learning. Numerous researchers are looking at how they can exploit the nascent area of quantum computing to develop new techniques that convey advantages over existing classical models. For example, developers are hoping that by using the quantum nature of quantum computers, they can enable specific algorithms to run faster or convey other benefits, such as higher quality results. Already there are many resources, tutorials and courses on machine learning.

Look at what one Canadian-based Quantum Computing company is doing in the QML space. Xanadu developed its own QML framework named PennyLane (the company founders are hopeless Beatle romantics, calling their other Framework “Strawberry Fields”). Researchers such as Maria Schuld and Amria Abbas are accelerating the use of QML techniques in the industry. A research article has shown the advantages of Hybrid Neural Networks over classical networks.

Robots could accelerate the vastness of the data collected. Just as Tesla vehicles have amassed vast quantities of data from their travails around the planet via roads, robots will accelerate that data collection just as FSD (Full Self Driving) has for Tesla. With the robots, however, the tasks will be way more diverse and heterogeneous than roads, leading to a mass of potential learning data that Tesla’s deep learning models can use.

Maybe not just yet, but soon, we expect businesses like Tesla to begin exploring how QML (Quantum Machine Learning) might offer them a potential advantage in their quest to build the ultimate AI (Artificial Intelligence) platform. Of course, working at such a scale, any tangible benefit in model training or quality of results might lead to a better product, and as we have made a case for already, Tesla is one of the most product-focused companies around that will be looking for any lever to pull to confer an advantage over its rivals. Of course, Tesla has yet to declare whether it is also working on quantum technologies or exploring them. Still, we think it is only a matter of time before the tech giant investigates Quantum in its computing workflows. After all, we have seen the likes of Ford and VW explore Quantum for optimisation and manufacturing, and we expect that Tesla could take it one step further and jump right into QML.