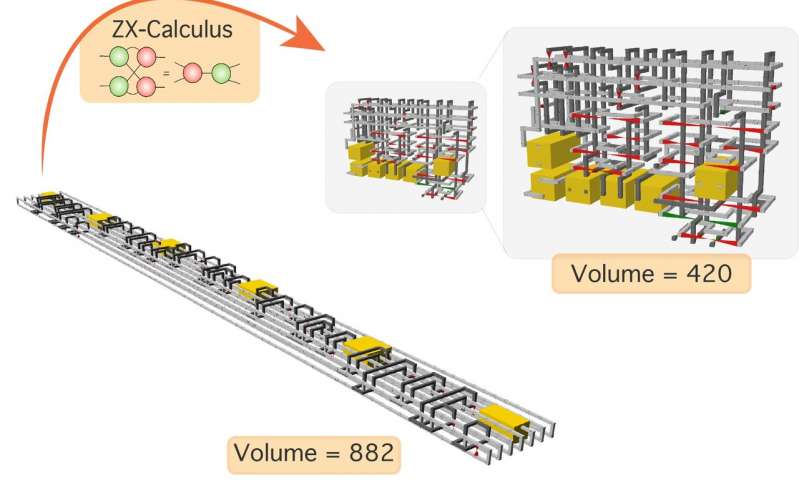 Any real-world quantum computer faces the challenge of needing to deal with errors with large numbers of physical qubits. These errors that accumulate are resource-intensive as well as time-consuming in terms of computation. Researchers have not found an effective software method that allows for quantum circuits to be compressed significantly, reducing the demands on hardware.

While quantum computers are not close to being commercially available, quantum advantage has been achieved. This is the ability of a computer to compute more than a hundred times faster than classical supercomputers. Quantum advantage has been achieved on Noisy Intermediate-Scale Quantum (NISQ) devices in some early proof-of-principle experiments.

However, NISQ devices themselves are prone to errors, and any real-world application of quantum advantage must have a design with a high error tolerance. NISQ devices are now capable of possessing 100 qubits, but fault-tolerant computers need millions at least to reduce error rates. Fault-tolerant computers need to be made larger and run longer, and yet this allows more chance of errors to build up.

Hardware may be able to address this problem, but researchers from the National Institute of Informatics (NII) and Nippon Telegraph and Telephone Corporation (NTT) in Japan have been confronting the problem. They addressed it through a software development angle by compressing quantum circuits in these large-scale fault-tolerant quantum computers. This potentially reduces the need for improving upon hardware.

‘By compressing quantum circuits, we could reduce the size of the quantum computer and its runtime, which in turn lessens the requirement for error protection.’

Michael Hanks, a researcher at NII and one of the authors of a paper, published November 11 in Physical Review X.

Surface code and its variants are what large-scale quantum computers use to correct errors in order to function properly.

The researchers focused on compressing the circuits of one of the variants called 3-D-topological code. It behaves quite well for distributed quantum computer approaches and can be used in many varieties of hardware as well. In 3-D-topological code, quantum circuits resemble tubes and pipe, and most refer to them as ‘braided circuits’. The 3-D diagrams can be compressed through manipulation and the volume occupied reduced. Until now, ‘pipe manipulation’ has been challenging to perform, and it is performed in ad-hoc fashion only. There have also only been partial rules for the process.

‘Previous compression approaches cannot guarantee whether the resulting quantum circuit is correct. “One has to be very careful to check its correctness every time one of these compression rules is applied. This is an important issue, as such a task is as hard as running the whole quantum circuit.’

The proposal of the research team was that the ZX-calculus would be used as a language for the intermediate compilation stage. ZX-calculus is a 2-D diagrammatic language developed in the late 2000s specifically to allow intuitive representation of qubit processes. It uses diagrams and images instead of words. Most importantly, it has a complete set of manipulation rules.

In the paper, the translation relations between ZX-calculus and the braided circuit components were discovered and ZX-calculus was able to be used. These two representations of logical gate circuits can be mapped to each other, the researchers discovered. This way, a brand new interpretation that was hidden all along was identified for future harnessing.

This language is capable of using transformation rules to alter circuit structures without changing the underlying mathematical meaning and its operation, thereby ensuring its correctness. With careful manipulation, the quantum circuit’s volume can be minimised, and considerable compression rates can be achieved when the actual braided circuit receives the new mapping.

With this new technique, the compression reductions increased from 40% to 77%, compared to previous efforts.

‘The compression method and its further development could deliver realization of a real-world fault-tolerant quantum computer years ahead of schedule.’

William J. Munro, a research scientist at NTT, who also contributed to the research

‘Interestingly, it could also be the foundation of future operating system development. It could still take many years for these software developments to be implemented in fully-scalable quantum computers, but our method could save a great deal of effort associated with hardware development in the meantime.’