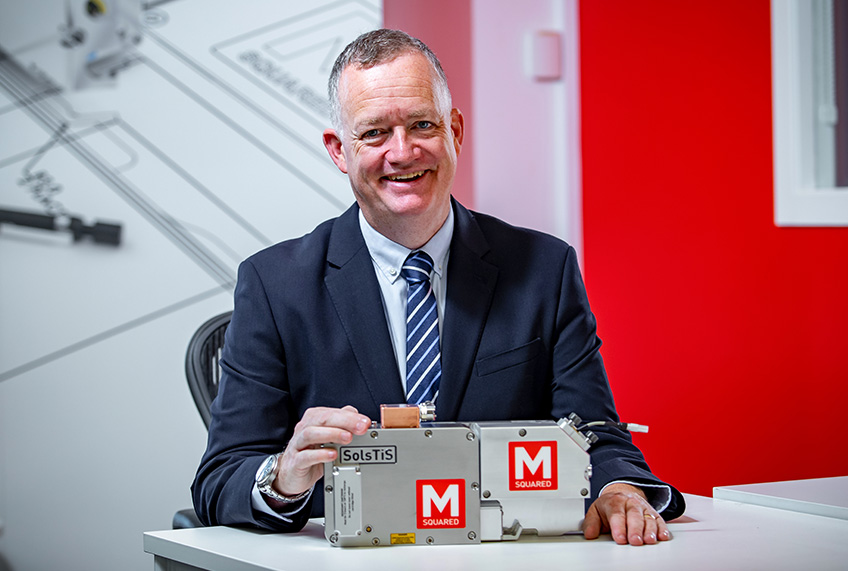 M Squared recently announced that it has received £32.5 million from backers to support its growth and to develop new technologies.

£20 million will be provided by Santander UK in the form of a debt facility, letting M Squared’s founders and management team led by Dr. Graeme Malcolm OBE to fund the acquisition of the majority of BGF’s current shareholding. These funds will also be used to fuel growth and newer stages in quantum technological development. The Scottish National Investment Bank, newly formed, will also support M Squared with £12.5 of capital.

‘Santander is delighted to have provided M Squared with £20m of debt facilities to support their strategic buyout and future growth ambitions. M Squared is a truly unique, cutting-edge, business driven by a high calibre management team, who we have got to know well over the last 10 months. Santander’s debt structure provided was specifically tailored to M Squared’s needs and ambitions, alongside funding provided by the Scottish National Investment Bank.’

This is the new Bank’s first investment, and it will allow M Squared to advance its research and development. It is important that this investment be used to innovate quantum technologies to combat climate change. The Scottish National Investment Bank and its patient capital approach also aligned with M Squared’s requirements.

M Squared’s innovations have a mission to address global scientific and technological challenges, including in fields as diverse as climate change, healthcare, quantum computing, and virtual reality. These goals are in alignment with all of the Scottish National Investment Bank’s three core missions. They are to transition to net zero, build communities and promote equality, and innovate to allow the UK people to flourish.

‘This Glasgow based business is at the cutting edge of innovation and is a recognised world-leader in its field with huge growth potential. It is a great fit with our missions and our investment will create real economic benefit in Scotland. We worked collaboratively to provide an investment solution tailored to M Squared’s needs, and our patient capital approach meant we were able to take the longer-term view that was needed. We are hugely excited about the future for M Squared and look forward to working with Graeme and his team supporting the next phase of its growth.’

Earlier in 2020, M Squared announced its place as the UK’s largest industry-led commercial quantum computing project and that it was an integral part of DISCOVERY, an Innovate UK Challenge Fund. The company also leveraged investment as a part of project Square. Despite the COVID-19 is now £50 million.

‘M Squared makes the world’s purest light – technology that has transformative, real-world, applications that can take on the climate emergency, greatly improve biomedical imaging, realise the next evolution of semiconductors, and now truly unlock the coming quantum age. Scotland is at the heart of the UK’s advanced science and technology sectors and sitting alongside world-leading universities and commercial partners – it has become a critical hub of excellence from which we can continue expanding globally. Our commercial and technological potential is enormous and with this transaction we have the ideal financial and structural platform to progress and realise substantial growth and launch major new developments. We are delighted to now be working with both Santander UK and the Scottish National Investment Bank, alongside continued support from BGF, on funding a shared goal to innovate and scale.’

BGF will still be a strong partner of M Squared even after the latter acquired the majority of its existing shareholding.This stems from having initially invested in M Squared in 2012. It was the beginning of a strong partnership.

‘M Squared, one of BGF’s first investments, received £6.4m across three rounds of funding over the course of the past eight years. The company has grown ten-fold since, crystalising a strong return for BGF. Our long-term view on investment and supporting growth via follow-on funding can provide a strong platform for businesses like M Squared to realise their full potential. Our flexible model also allows us to collaborate with other institutions and we are pleased to be partnering with both Santander and the Scottish National Investment Bank in its first investment. We are also delighted to continue as an equity shareholder in M Squared and look forward to supporting the management team and the business in the next phase of its growth journey.’

Some of M Squared’s shareholders are Scottish Enterprie, the University of Strathclyde, and the University of St. Andrews. They are very supportive of the new funding, as it is also one of Scotland’s most ambitious funding projects of 2020. Glasgow will also be recognised as a global location for quantum and other advanced technologies.

‘This financing is the culmination of over 18 months determined effort and commitment to ensure that M Squared is now supremely well placed for the next stage in our journey. A challenging and technical transaction such as this, involving a number of stakeholders and inputs, required a proactive and agile advisory team and our thanks go out to all the team members in their efforts and determination to complete this dynamic transaction.’