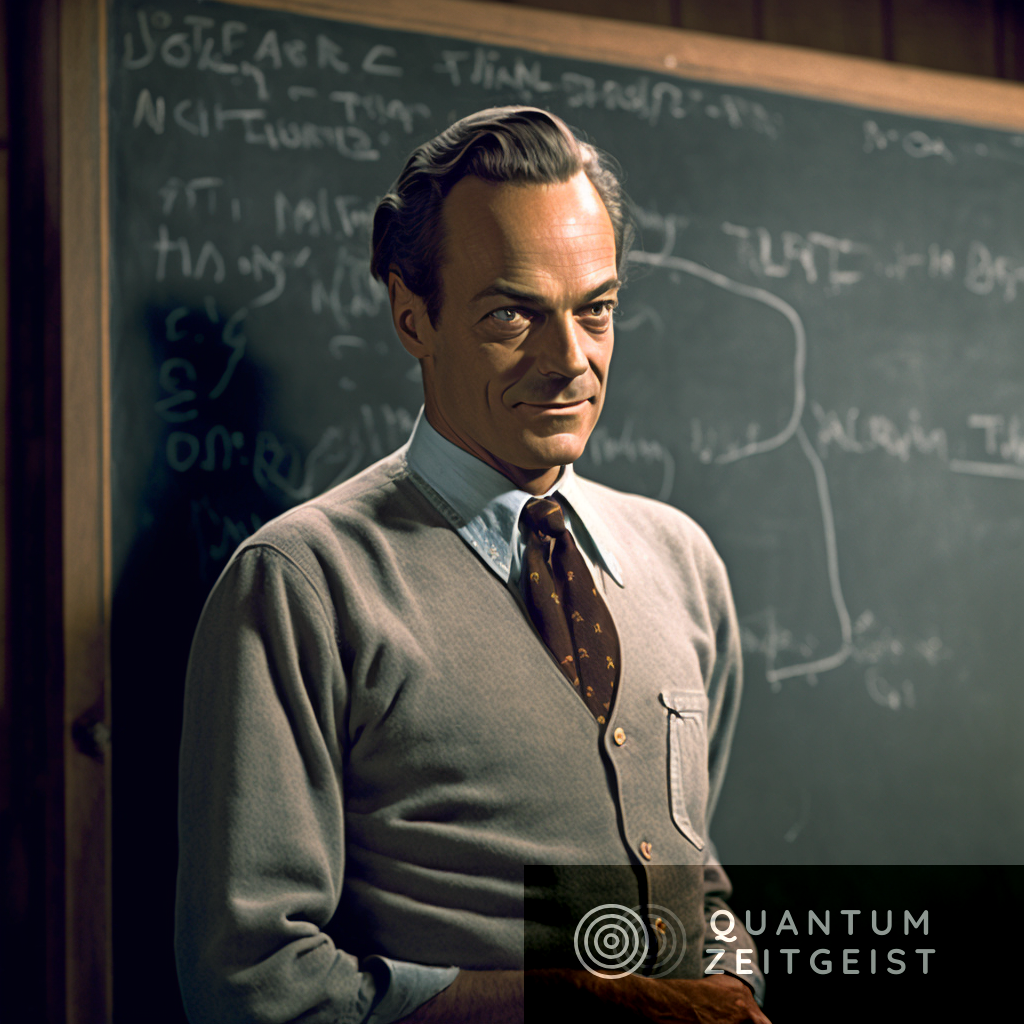 Richard Feynman was an American physicist who contributed significantly to developing quantum mechanics and quantum computing. Feynman was born in 1918 in New York City and received his PhD in physics from Princeton University in 1942. He is well known for his work in quantum electrodynamics (QED), which he developed in the 1940s and 1950s but crucially also for his work towards the ideas of Quantum Computing and even Nanotechnology. Richard Feynman was born on May 11, 1918, in New York City, United States.

Richard Feynman was a physicist who significantly contributed to the development of quantum mechanics and quantum computing. Feynman is best known for his work in quantum electrodynamics (QED), which he developed in the 1940s and 1950s.

The connection to Quantum Computing

In 1982, Feynman gave a lecture at the MIT Computer Science and Artificial Intelligence Laboratory. He proposed using quantum mechanical phenomena to perform calculations that would be impractical or impossible using classical computers. This idea was later developed into the field of quantum computing. Feynman’s ideas and work continue to influence the field of quantum computing, and he is often considered one of the founders of the entire field.

Feynman’s idea was to build a controllable quantum environment and use it for analogue quantum computations of things that are hard to simulate. Simulating complex systems often becomes an issue for systems which involve many-body interactions.

Simulating a single electron is relatively simple. It is in either state A or state B. We may even say spin-up or spin-down to denote the two possibilities. With two electrons, you have the possibility of having both in state A, both in B, one in A and the other B, or vice versa – a total of four probabilities (AA, AB, BA, BB). With ten electrons, this rises to 1,024 probabilities (2 to the power 10), and 20 electrons have 1,048,576 combinations. Consider how a potential drug molecule binds to a receptor, and you have some idea about the complexity and possible combinations that must be considered. Simulating, therefore, by conventional means becomes “computationally expensive” when you have potentially hundreds of atoms and, consequently, thousands of electrons.

But the systems that a scientist wants to investigate often have millions of electrons, and the number of probabilities becomes unworkable. In the late 1970s, Feynman began considering this problem. In a paper published in 1982, “Simulating Physics with Computers“, he postulated that to simulate quantum systems, you would need to build quantum computers. This may seem a bit of a misnomer, that quantum simulations require physical quantum systems, but this is now considered one of the very purposes of quantum computers where there are not enough accessible states available in conventional classical simulations.

Richard Feynman was also interested in using quantum mechanics to perform calculations. In 1982, he gave a lecture at the MIT Computer Science and Artificial Intelligence Laboratory in which he proposed the idea of using quantum mechanical phenomena to perform calculations that would be impractical or impossible using classical computers. This idea was later developed into the field of quantum computing.

Feynman received the Nobel Prize in Physics in 1965 for his contributions to developing QED (Quantum Electro Dynamics). He died in 1988, but his ideas and work continue to influence the field of physics and the development of quantum computing.

The connection to Nanotechnology

In 1959, Feynman gave a lecture at the American Physical Society meeting in which he discussed the possibility of manipulating and arranging individual atoms and molecules to create new materials and devices. This lecture, known as the “There’s Plenty of Room at the Bottom” speech, is often considered the starting point for nanotechnology.

Nanotechnology is the study and application of tiny things and manipulation of individual atoms and molecules. It involves creating and using materials, devices, and systems with unique properties because of their small size. According to the National Nanotechnology Initiative, Nanotechnology is science, engineering, and technology conducted at the nanoscale, which is about 1 to 100 nanometers.

Nanotechnology or Nanotech has the potential to revolutionize many fields, including electronics, medicine, energy production, and materials science. For example, nanotechnology could create more powerful and efficient computer processors, develop new and more effective drugs, and create more robust and lighter materials (nanomaterials). Some have even postulated nanomachines that can get inside the human cell and fix and repair it as needed.

To give the full title: “There’s Plenty of Room at the Bottom: An Invitation to Enter a New Field of Physics” was a lecture given by physicist Richard Feynman at the annual American Physical Society meeting at Caltech on December 29, 1959.

We can even link nanotechnology and quantum computing, for the techniques that researchers use to develop the latest qubits (the devices that do the computing) are often nanoscale and require fabrication at ever tinier length scales. Just as traditional transistors in microprocessors developed by the likes of Intel, AMD and NVIDIA are getting smaller, so too are the qubits (the quantum analogue of the transistor). For example, quantum dots can be used as semiconducting qubits, where the spin of electrons is used as the “switching unit” and can be operated upon.

In 1975, Richard Feynman and his wife, Gweneth Howarth, purchased a Dodge Tradesman Maxivan. They had it decorated with Feynman diagrams, which are symbols that Feynman himself had created to depict complex particle interactions through simple lines and loops. While it might appear arrogant to display one’s intellectual accomplishments in this way, Feynman’s daughter Michelle believes that the decorations on the van reflected Feynman’s passion for physics. The van still exists and has been lovingly restored.

Richard Feynman was a member of the team of scientists who worked on the Manhattan Project, which was the Allied effort during World War II to develop the first nuclear weapons. Feynman was a relatively junior (at age 24) member of the team, but he made significant contributions to the project, particularly in developing the first successful atomic bomb. When he was at Princeton, Feynman was recruited for the theoretical division of the Manhattan Project. Feynman was present at the first detonation of the atomic bomb. It is thought that radiation exposure may have contributed to his death at 69 from abdominal cancer.

There is no question that Richard Feynman inspired generations of scientists, even now, almost four decades after his death. He leaves a legacy of radical thought and new innovative ways to think about problems and has impacted two significant fields: nanotechnology and quantum physics. If you want to read more about his work, I can suggest the following books Richard Feynman has authored: