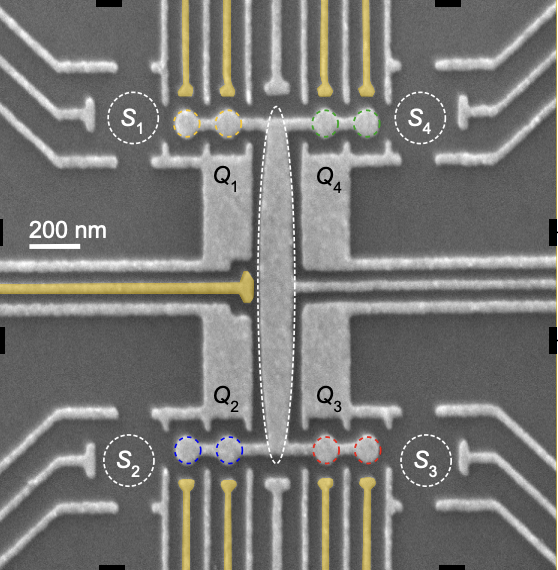 Quantum physicists at the University of Copenhagen have announced a major milestone in quantum technology. By using semiconductor qubits, different from regular superconductor technology used by Google and IBM, the physicists have been able to operate and measure multiple qubits simultaneously. This is an important breakthrough in performing quantum calculations.

In a research paper titled Simultaneous Operations in a Two-Dimensional Array of Singlet-Triplet Qubits, the physicists demonstrate how they simultaneously operate and readout four singlet-triplet qubits arranged around a central quantum dot in a two by two array with four integrated charge sensors.

The qubits were arranged in a 2×2 two-dimensional geometry and implemented as singlet-triplet qubits in GaAs. This allowed the sensing of temporal overhauser fluctuations at four different sample locations.

Additionally, the diagnostic value of inter-leaving different qubit operations was also explained. The alternation of overhauled rotations and exchange rotations revealed potential errors in qubit initialization. Therefore, providing insights for optimizing qubit fidelities that can be an alternative to existing techniques such as the closed-loop control.

The coherent spin exchange between one of the qubits and the central multielectron dot was also demonstrated. Here, the observed exchange profile aligned with previous studies in linear arrays.

On operating and measuring multiple qubits simultaneously, this is carried out by the excitation of all inductors continuously or by applying short read outbursts within each qubit operation cycle. The four qubits were simultaneously controlled by applying eight-dimensional gate voltage pulses

Conclusively, the result of the research suggested that large quantum dots may be useful as tunable interqubit couplers to realize two-dimensional qubits networks. Large processor companies such as Intel are keen to exploit many decades of extensive semiconductor research by building qubits from well-characterized materials.