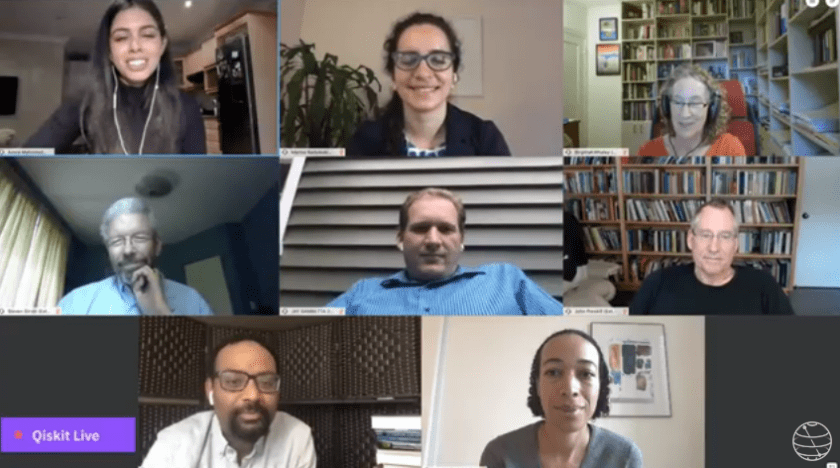 Last week, IBM’s global summer school ended successfully. It was well attended with over 5000 participating over the world and 2000+ people were watching at the same time, and a huge discord channel was created for the purpose. It was more like a conference with lots of excitement and fascination with a new rising technology: The Quantum Computer.

I was lucky enough to participate as a lab student. The lab students had an excess of the learning materials and even a study group to help complete the lab assignment.  As a Ph.D. student, the lectures and lab were easy to follow, but I was quite shocked that many high school students were working together. IBM is doing their best to integrate with all the people with different educational backgrounds. I ask myself what was I doing during my high school instead of learning quantum computing?

It was well organized and this class was equivalent to the one-semester class for the 4th level of undergraduate physics-major student.

On the last day of the class, IBM hosted a panel discussion with faculties from top universities and vice president of IBM Quantum. You can still watch this on Quantum Computing Careers:

It was a very insightful discussion, and it introduced job opportunities for physicists, computer scientists, and engineers no matter whether you have a Ph.D. or not. I highly recommend watching the video.

The assignments were quite straightforward. We had 10 mins to an hour of lab lecture by several lab tutors: Abraham Asfaw, James Wootton, Nick Bronn, Abhinav Kandala, and Antonio Mezzacapo. They asked us to add a simple line of code to complete their algorithm.

There are many lab tutors in the discord chat working really hard to help students confused with quantum computing. My personal saviour was @raisinbrann99 (I feel really bad that I don’t know the name!). I was new to Python, so I was quite confused about how things work at the beginning, and she magically solved my problem!

There were useful channels in the Discord group. We even created study-groups to help each other. Mentors were available pretty much 24/7 in the channel to help students around the world in different time zones.

One of the great things about the IBM summer school is the networking opportunities. In their discord channel, we had a server named networking. Therefore, we could connect via LinkedIn and Facebook, IBM’s Qiskit slack community, and IBM Qiskit twitter account. I also helped to build one of the quantum computing communities on LinkedIn.

This was a golden opportunity for me. I was able to talk with many physicists, financials, engineers all around the world, and make a good connections with them. I really enjoy talking to random people who are fascinated by quantum computing like me!

There are many great things that I want to keep talking about, but I believe that there is some room to improve for a better summer school.

It was hard for me to talk and collaborate with other people at the beginning. Due to the COVID, everything was virtual, so we needed to talk to strangers in discord without any guidelines. I believe it can be fixed by actually allowing video conversations with the group members in the same time zone led by the assigned group leader. I end up creating my own discord channel and inviting ~10 people to have a voice chat together. This way, it is much easier to connect with people and collaborate together to complete the project.

Secondly, the summer school provides lab solutions on the next day to the assignment. I really appreciate the solution, but there was no difference between who completed the assignment before and after the solution. I see their intention toward including all the people without any dropout, but it makes it really difficult to work with other people because it is hard to find people working on the same project. I believe a more strict deadline will force students to collaborate together and motivate each other.

These are all minor concerns. Without any hesitation, it was a great summer school, and I really appreciate IBM’s effort to create an environment for people who are fascinated by quantum computing. Especially these uncertain times due to the COVID, I had an opportunity to learn new skills and meet with wonderful people.

Saesun Kim is a Ph.D. student in experimental quantum optics at the University of Oklahoma and the Center for Quantum Research and Technology.  Twitter @saesunkim