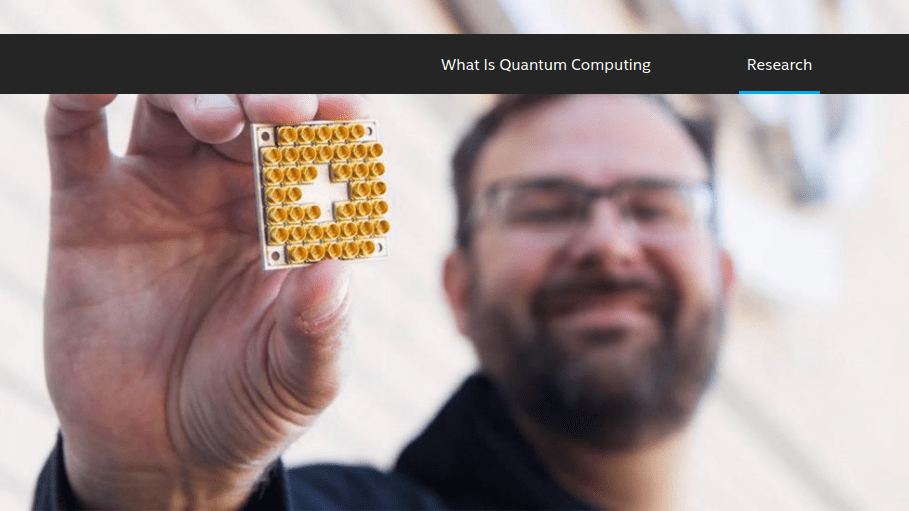 Intel share price craters, but it is the only chip maker investing in Quantum Computing

The last few months have not been kind to Intel, which is a giant of the computer processor world with competition from the likes NVIDIA, AMD Micron and ARM. In fact NVIDIA may purchase ARM. No doubt being a chip maker is competitive business. However when it comes to Quantum Computing, there is only one mainstream manufacturer investing in research into Quantum Technologies: Intel.

As the share price of Intel is hit from delays to production of their 7nm processor range, further downward pressure appears from the likes of their major competition: AMD on the CPU side and NVIDIA on the GPU front. However Intel is the only company out of the main manufacturers actually researching and developing Quantum Computing Hardware.

Intel founded in 1968 by Gordon Moore (famous for Moore’s Law) and Robert Noyce has become one of the most stable technology companies continuing to provide the ability for us to compute with ever more power, more transistors per chip offering faster computation. As you’d expect from a company that has everything vested in finding speed-up for the worlds computers, Intel are looking at alternatives for classical computing technology. One of these research threads is Quantum Computing.

Intel is famous for innovation and spends a vast amount on R&D. The Intel Labs in Oregon is producing quantum processors and working on control systems that aim to see Quantum Computers within a decade.

Intel created a 49 qubit processor named Tangle Lake. Of course Intel with vast experience of semiconductors and control makes it a perfect candidate for using its vast prowess to develop new processor technology. If Quantum Computing turns out to be as disruptive as many people think, then the rewards will go to companies who have been developing allied technologies that are ready to transition.

Unlike their competition (AMD, NVIDIA etc), Intel are actually involved, but AMD and NVIDIA have no quantum technology program, despite the fact that they could be blindsided by technical developments in the Quantum Race.

The competition in processors

Historically AMD was famous for copying Intel’s X86 architecture but are now beginning to stand on their own two feet and innovate. But have no quantum computing effort which could eventually come back to haunt them. Much the same for NVIDIA and their GPU’s. Graphical Processing Units (GPU’s) which aim to offer speed advantages over CPU’s for certain tasks. Again with specialist computer algorithms taking advantage of GPU’s we could see Quantum Computers being used for certain specific applications and algorithms.

For now, as commercialization of Quantum Computers is in the early days, share holders are likely not wanting to pick up the expense of developing quantum computers, but credit to Intel who have the capacity to prepare for tomorrow not just today.

The motto of the story is here for shareholders is finding the balance between selling today and selling tomorrow. Many are genuinely surprised that companies such as AMD and NVIDIA and even Micron are not investing in Quantum Computing, because this technology has such capacity to upend the entire compute stack.